J.J. Gibson outlined a radical approach to optics in his 1979 book The Ecological Approach to Visual Perception. In order to perceive the structure of space, we need just one thing: light. Namely, reflected light. The beauty of Gibson’s thesis is deftly understood by simply walking outside and realizing that a single light source, the sun, is providing a rich depth of character in our world.

The well-lit world need not even be in direct sunlight. It can just as easily, and perhaps more richly, be found in the forest floor where surfaces are altogether shaded yet remain illuminated. How? Reflected light. The sun hits the treetops, the leaves befall original light to lower levels of leaves, the tree trunk, neighboring surfaces, then on to plants, roots, moss, rocks, water sources, and so on until the light finds its way, absorbed, into the ground. For Gibson, all those depth cues like height in the field, texture gradient, and size constancy can be left behind. In fact, there is no place for such cues as Gibson outlines that our perception of the ambient optic array is direct. By direct he means there is no room for cognitive intervention, no room for appraisal, no time or need to assign depth cues.

The leaves and branches on the interior of the holly bush below, right are completely shaded 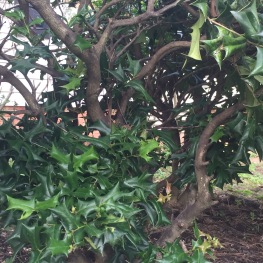 but still visible, still colored, still perceived. The light finds its way inside of the bush through reflection of the exterior leaves and branches. Note that the exterior of the bush is not even in direct sun. It is under a canopy of trees and sky was overcast when the photo was taken.

Fred Eversley, a sculptor who has found success since the sixties with his first solo show at the Whitney Museum in 1970, has a wonderful exhibit at the Muscarelle Museum of Art right now (Fall, 2017).

As a Gibsonian, trained in my graduate school years at Emory by Dick Neisser who was a contemporary and friend of Gibson, Eversley’s works offer encapsulations of the beauty of reflected light. Both its simplicity and its depth. At first, it might sound strange to pair simplicity and depth together. But that is precisely the elegance of Eversley’s work as it is the acuity of Gibson’s thesis.

For Eversley the light commands energy. This energy finds its way into all living forms, is transcendental, and his works provide lenses, both actual and metaphorical- into our world and worlds beyond. For Gibson, the light outlines the world, its structure, our opportunities for action or affordances in the environment. For both, the sun is the ultimate light source, a unifier of illumination and energy.

The Eversley exhibit offers a view into a world of Fred Eversley’s vision and accomplishment. But it also offers a window into the beauty and value, dare I write necessity, of light and its reflection. The show’s curator, Dr. John Spike, uniquely and deliberately placed Eversley’s works under spotlight illumination. The result is a continuum of experiences. From feats of hand polished resin to be marveled at in their own right, to groups of works offering a landscape of shapes and illuminations of inspired metaphor including lenses, tunnels, and caves to the depths of transcendental character the pieces convey by way of their illumination including pools, eclipses, even piano keys. It is a shocking experience of grandness in simplicity.

Indeed, Gibson’s thesis on our three dimensional world structure as entrenched in the ambient optic array can perhaps no more elegantly be found than in Fred Eversley’s works. True forms of structure brought to life by reflected light.

Fred Eversley’s work will be on exhibit at the Muscarelle Museum of Art in Williamsburg, VA through December 10, 2017.