In the Gestalt school of psychological thought, the mind and brain condense environmental stimuli to see them in their simplest form. The idea is that the whole — that which is seen– is of greater value than the processing of each individual part. This theorem can reach beyond basic perception and Steve Prince’s The Links work gives us an example of Gestalt in art form. 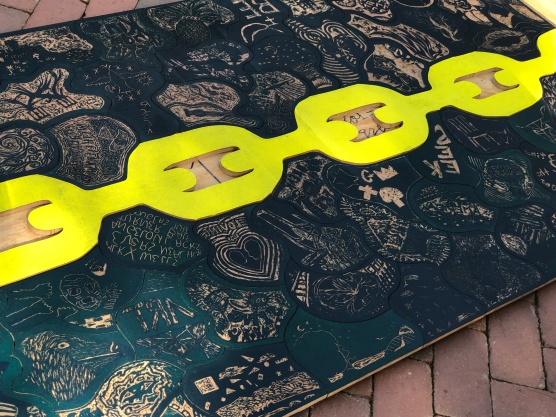 Here’s a brief background on Gestalt. The principles are reaching their centennial anniversary, having been introduced in a paper by Wertheimer in 1923. No, Gestalt is not the author of the principles but a German term that means shape. There are six principles commonly identified as guiding perceptual organization: similarity, closure, continuation, proximity, figure/ground, and prägnanz (law of order). Examples of each are here. 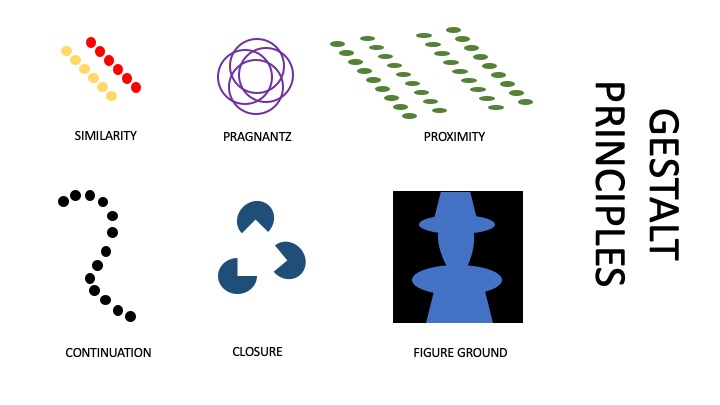 Perceptually, it is easier to see a white inverted house shaped figure in front of three blue circles than it is to see three pac-man shaped objects facing inward in the closure example. The figure ground principle is bi-stable: sometimes the blue “person” pops out, other times one might see two profiles of arguing faces in black. Wholes are seen, not individual parts.

Let’s get back to The Links piece by Prince. The artist created a wooden tapestry by having lots of individuals work on separate parts. In this case, it was large wood panels cut into puzzle shaped pieces. Each piece was then carved to express a response to the 400th anniversary (1619) of the first Africans forcibly brought to the English colonies of North America. The project seeks to link conceptualization of that history to 2019 and present day mindset. Students in my Neuro-aesthetics course participated and created their own carved imagery for the tapestry. 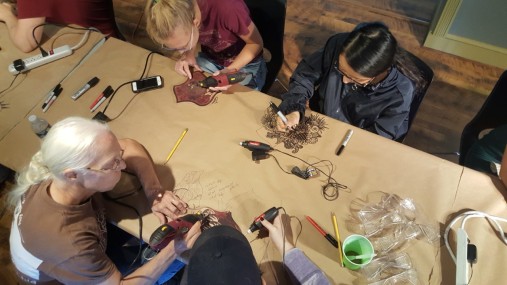 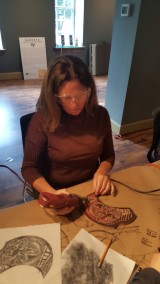 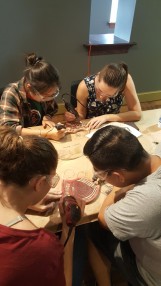 Prince invited hundreds of individuals from across the globe to participate, each creating their own hard carved representation. No one looked at any other piece created, so each element originates from within the self, not in reaction to other imagery or as a piece that would match or mimic surrounding pieces. And, there was the dramatic punchline of Prince himself driving a steamroller over the paper laid upon on the woodcuts to create the large scale ink print, which holds its own lasting significance of force and fusion. The experience of the finished work is a conglomeration of thought and perspective, a melding of representations of ideas like justice, peace, belonging, acceptance, and forgiveness.

So why does the art created by Prince relate to Gestalt principles? It is simply the level at which the whole is so much more than the individual parts. But the more fascinating aspect is that the whole in this case reaches much further beyond the actual constructed work because of the way in which it was put together in a public forum. That is, it is not only a piece created by grouping a large number of separate pieces together, but also a piece created communally within a celebration that included dancing, poetry, and groups of people working together to physically paint then press the ink print.

Art has the ability to push thought beyond traditional frameworks. It can ask us to perceive, feel, react using cognitive and emotional processes we may not typically engage. In The Links piece, the observers (many of whom were also creators) are presented with the opportunity to attend to individual pieces (the parts) as an experience intended to form a lasting impression (the whole) that is far more than perceptual but is certainly Gestalt.

The Links can be experienced in person at the 1619/2019 exhibit at the Muscarelle Museum through January 12, 2020. Read more about the project in news articles here and here. Follow the work of Steve Prince here.